After nearly 5 months beached in Saudi Arabia due to administrative issues I managed to get home for a few days last week and despite all the comings and goings of sorting out a new house I also managed to get out for a bit of birding.  Weather was forecast as showers with bright spells but as ever the bright spells got washed away but I was determined to get out come rain or shine, so the rain won!!

Anyhow I did have a wonderful day out despite the weather and got to see a good selection of birds.  Was not terribly successful photographing some of them, which we can put down to the weather.  Although my bum still hurts after crashing down the stairs trying to get to the camera before a beautiful Jay departed my new back garden.  Ho hum, the joys of birding, yes you guessed it, he got away!!

These are the ones that didn't;

Ok so not exactly a bird!  There are about 30 rabbits happily residing in the field across from my house and in the early morning they pop out for a little breakfast.  Sensibly they are pretty skittish and vanish into their burrows at the slightest sign of movement.  There are a small number of deer in the woods behind﻿, I have seen them a number of times in the past but not on this occasion.

﻿
Immediately behind the rabbits was a pair of Common Moorhen who also take advantage of the low grass and readily available cover.  It is a little unusual to see them this far from water around here, this being about 40 or 50 meters.

﻿
In the river along my walked were a significant number of Mallard.  There are about 30 along the mile long stretch  of Colne Water and as you can see there are now a couple of juniors joining the ranks.  This mother had 3 young with her.

﻿
There was no sign of a male around the little family but I got this photo of one a little later.

﻿﻿
The crow family are very active around our area with large numbers all over the place.  There were dozens of Magpie in the area.  I had a fascinating experience with these while I was at home during the week.  I put some bird food out in a hanging basket by a fence at my house.  Its mainly intended for small birds and while it is secure, it looks a little weak to support heavier birds.  The Magpie clearly thought so too but landed on a fence nearby (maybe 15-20cm away) and proceeded to use a small branch from a nearby young tree to pull the hanging basket over to where it was.  A tricky exercise as every time it let go of the branch the basket swung back out of reach.  But I have no doubt by the time I return again they will have worked this out.


﻿
Every morning we awoke to the sound of hundreds of birds singing.  All the local small birds were represented, the Blue Tit, Great Tit, Blackbird, Chaffinch, and a selection of warblers.  The little groups of Long Tailed Tits were also active but they are not quite so loud.

﻿
Everywhere the Jackdaw!!  Literally this has to be one of the most common of the crow family around our area.  Virtually every view of the sky will have at least one if not dozens.

﻿
One bird that was a bit unusual was the Mandarin Duck.  This female with 3 or maybe four juveniles.  These are not known to breed in the area and are rarely seen this far north, although I have seen a pair of them on one occasion in the past. The male of this species is one of the most colourful of all birds, the female less so but nonetheless a handsome bird, I think. I have reported these to the local experts and will see what they have to say.

﻿﻿
I got a number of photos of the Carrion Crow on my walks around the area but came across this guy and his partner on a couple of fence posts by the grave yard.  It was raining when i took the photos and they seemed to be perched there hunkering down and not enjoying the rain.  (or maybe they loved it and it was just me who didn't, who knows).

﻿
At the Foulridge end of the lake I found 3 Mute Swans feeding in the long grass.  I have been down here quite a few times since moving to Lancashire but can't remember ever seeing these birds on the lake.  I am sure they must do as they are not at all rare around the area but as I say I never saw them there.
﻿
A very common sight on the lake is the Great Crested Grebe.  On the day I visited there were 6 or 7 but have often seen many more.  I don't think I will ever tire of watching this bird, its do beautiful.  I have never yet managed to see them do their pair dance first described with great excitement by J.S.Huxley at the turn of the last century.  One of these days. :)

﻿
The area around Colne is usually good for seeing Wagtails like the Pied Wagtail above, but on this day I only spotted the one and at a bit of a distance.  I did not see any of the Grey Wagtails that usually inhabit the river area at this time of year.

An ever present delight in the area are the Blackbirds which wake you every morning with their song and screech their shrill warning calls everywhere you go, especially when you have just spotted something interesting.  Still despite this you have to love these cute little birds. ﻿
The Wood Pigeon is one of these birds that is everywhere. God knows how many there are in the UK but I guess it must be millions.
﻿ 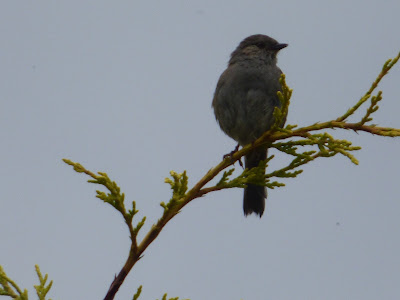 Finally, perched right on the top of a tree at the bottom of my garden was a dapper looking Dunnock.  I have to admit this is the first time I have seen one of these perched on top of a tree, I normally see them in the undergrowth.
As always, my birding day was most enjoyable even if it was spilling with rain all day.  Still back to the desert next week and a slightly different type of climate challenge.
﻿
Posted by bernard at 22:42 No comments:

The furnace at Al Hayer

Finally getting back out birding after a few weeks of turmoil with messed up travel plans and cancelled flights.

I decided on the title for today for two reasons, the first being the fierce temperatures we are having at the moment which are running between 42 and 46°C.  The second reason is that on my walk I noticed that the entire lower half of the reed bed beyond the lower field, almost for half a mile to the south had been burned out over the past few weeks.  You may notice there are one or two more photos of warblers than usual and it is mainly due to this fire that this is so, y0u normally can't see them in the dense reeds.


The Black Scrub Robins were out to play today, there being about 8 or ten of them around the area today.


﻿
As always my route was monitored by the ever present White Eared Bulbul which were everywhere and along with the Laughing Dove, announced my arrival in the area to the rest of the population.  I think the Bulbuls are just naturally curious birds, the Laughing Doves are naturally very wary around the area as they are constantly being shot at by trigger happy locals.


A small flock of 12 Mallard were around the area today and made a number of short flights while I was there.  I was not able to get close to where they were on the river so some slightly fuzzy shots is all I got of them in the air.

There were also a good number of Purple Heron about today, I spotted 6 or 7 but again never got a shot of one on the ground.


I spotted two Grey Heron today at different ends of my walk, as it happens these photos are of the second one as the other was in the reeds and I could not get a good photo.  Its nice to see these guys again as I have not seen them for the last few visits.


The Streaked Weavers were out in force also with this fine male making lots of noise.  These are among the loudest of the birds around along with the Graceful Prinia who are constantly calling in the bushes.


There were quite a few Laughing Dove around and about 7 or 8 Namaqua Dove flew over while I was there but the Eurasian Collared Dove shown above was the only one of these guys I saw all day, I am sure there were more about in the fields.
The Crested Lark were about in quite large numbers today, I really can't remember seeing quite so many of these before.  They are a constant around the area but usually spread quite evenly around, today there were probably over 25 of them and were just about everywhere.

The Spur Winged Lapwing (or Plover) was busy in the recently tilled fields today gathering bugs.  There are usually a couple about at this time of year but I only saw this one today.

The Little Green Bee Eaters were all looking a little drab today, missing most of their usual iridescent colouring, I expect they were all juvenile.

There were quite a few warblers about today, although, as I mentioned in my introduction, it may have just been that they were more visible than usual due to the loss of cover caused by the fire.  My ID skills fall down badly with this group so will be seeking help but show the pictures for now. 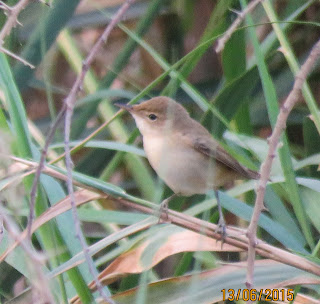 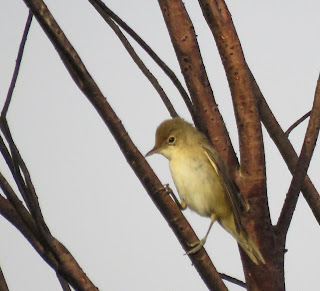 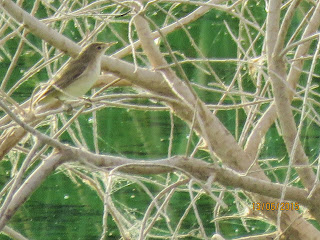 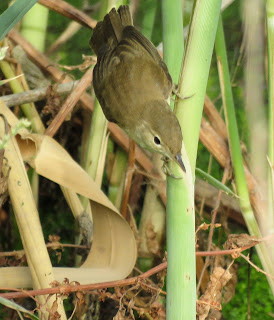 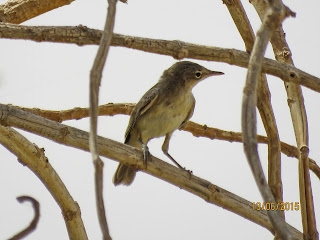 I spotted a couple of Barn Swallow feeding out in the fields but then when I was returning to the car I spotted about 15 others feeding in a small area along the river.  They were swooping along a short stretch of the river by the bridge and managed to sweep under the bridge with great ease.  I returned to the nest site where I spent a good deal of time over the past few months and found that it was all but abandoned by the Swallows.  However, there was evidence that House Sparrows and at least one other Laughing dove had taken up residence in the Swallow nests adding twigs to the top to make the nest more to their liking.  The one nest which I had witnessed being built from scratch earlier in the year and which was used is basic cup form to raise a brood had now been added to significantly with the sides being built up quite a lot.  I wonder if it is being used by some other bird or if this is something the Swallows do.  The nest itself was empty.
﻿
Posted by bernard at 09:57 No comments: