Listed below are the co-ordinates for the various locations I detail in my notes.  I will include an overview and where possible a map in due course. 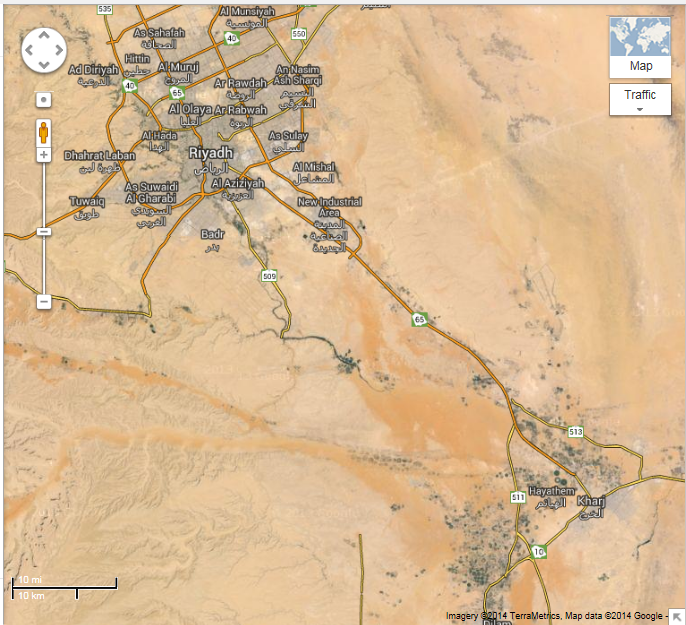 This site is about 15km south of Riyadh at the tail end of the 509 highway. You can just make out the sprinkler fields in the centre of this picture. 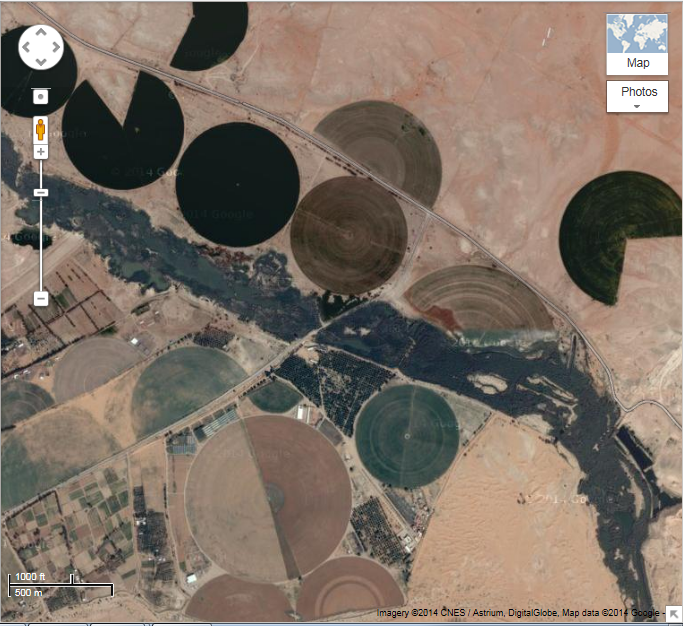 Zoomed in a bit you can see the river running more or less diagonally across the picture.  Most birding sessions begin at the bridge almost dead centre of this map and proceed south east along the southern side of the river or north west along the dark coloured fields on the north side of the river.  The river itself is a dense mat of reeds.  However, the area provides a nice selection of habitats in one place including farmed area, desert, reed beds, some mud shallows and some small areas of open water.  On a number of occasions the area has suffered serious flooding which all but washed away the road and left some large pools in the farmers fields.  Amazingly about a week later we spotted some teal casually swimming in these.  The soon dried out but reappear every now and then after heavy rain.  The prince that owns this land does not permit hunting so this tends to occur more in the bottom right desert area leaving the farmed area for the birds and us.


About 3 or 4 km close to Riyadh on the main 506 highway is the town of Al hayer and the Riyadh River flows by this all year round.  My home patch, described above, is further downstream (off out to the right of the map).

﻿
﻿﻿
Where the road meets the river is a bridge and there is a steep sided ravine which runs north west in a gentle S shaped curve towards the dam which is located at the top of the highlighted area (just visible across the river). It is possible to walk along the riverside on the town side for about a kilometer but it gets blocked by farm fences and scrub. I get the car and follow the road back up to the op end of teh town and start afain into the ravine a little futher along.

To the south of the Al Hayer fields are a couple of lakes set back in from the road. 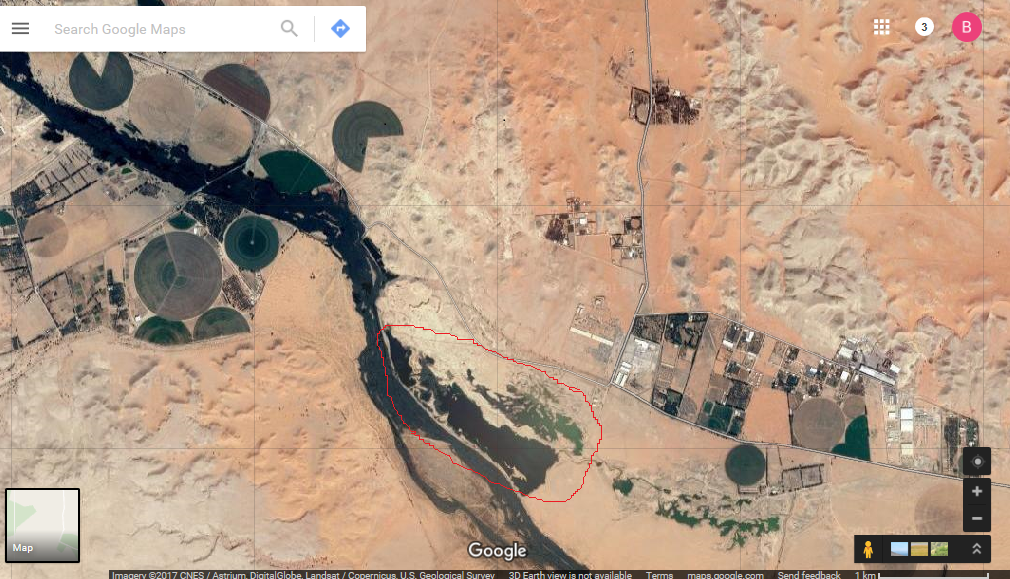 The two lower ones are quite deep and are fed directly from the river.  The upper area, closer to the road, is I think an old quarry which is about 10m below the levels of the two lakes. You can walk quite easily between the two.  Have made a good number of trips in this area and it has been very good for birds including on a couple of occasions, more than 100 Herons, 4 Desert Eagle Owl and a variety of duck.  The water level in the two lower lakes does not vary much over the year but the quarry area does vary quite a lot.  I am not sure what the attitude of he landowner is to visitors but I have been seen by them on a number of occasions and they have not commented one way or another, I guess small numbers and not too frequent is ok with them.

A wastewater lake to the north of Riyadh approximately 30km from the centre of town.  Relatively recently been attracting birders for its nice mix of water birds, waders hedgerow birds and desert birds which all reside in close proximity. 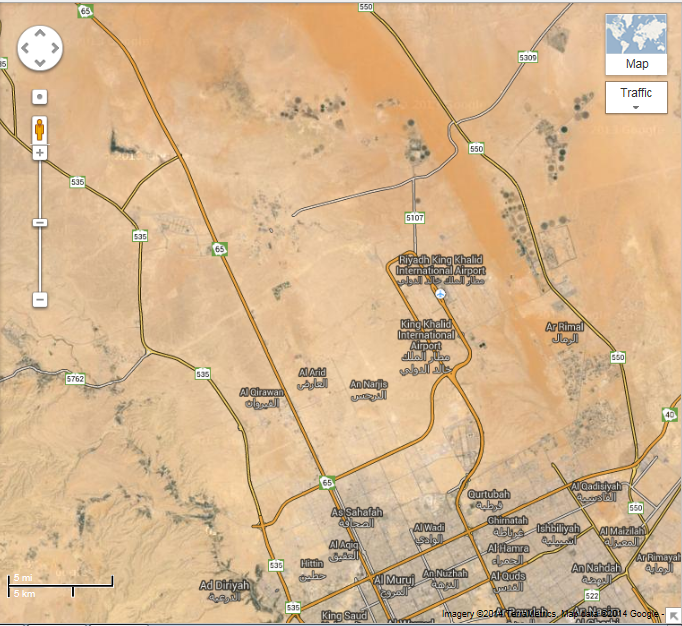 Located along Highway 65 it is the "L" shaped area in the top left corner of this map between 65 and 535. 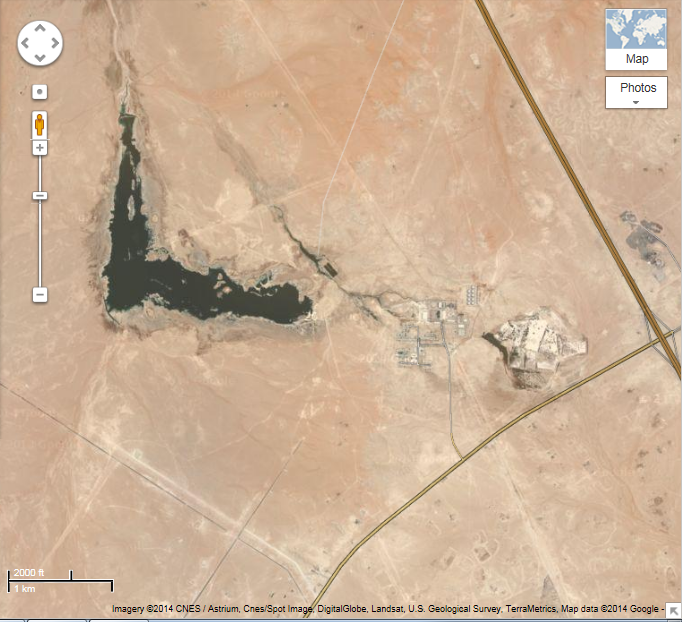 Access is from the adjoining road between 65 and 535 just above the word Digital Globe and a dusty road takes you to the lake.  All else fails wait a bit and follow one of the water tankers.  Unfortunately hunting is not banned in this area and there are almost always some about.  Best day to go is really early on Friday morning if you can as most of the hunters will be at prayer.

This site is an old quarry which was used in the past for extracting building materials.  It filled with water from a nearby marsh which itself was fed by waste water from a small industrial estate located near the main road. In recent years the water is being disposed of in a more controlled manner and the marsh area has dried up.  The quarry was flooded to a good depth but over the past 18 months the levels have fallen away and are now (October 2016) about 3 meters lower than they were and I doubt that there will be water left there this time next year. A great pity in a way as it was a breeding site for a good number of waterfowl and quarry wall dwellers, even if it was a bit of an eyesore. 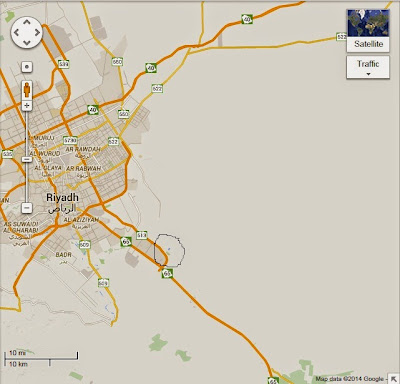 The Cricket Club is just by the bend in the 513 road as marked.﻿ 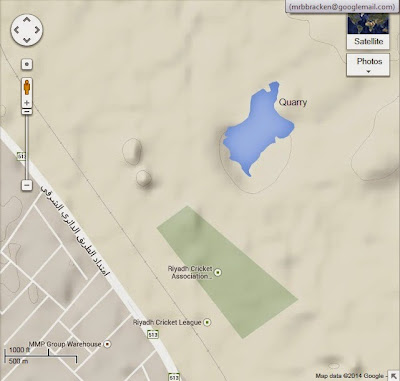 There is not much hunting in the area any more although you occasionally do come across the odd one still.  The lake has easily the highest concentration of Little Grebe in the Riyadh area to my knowledge and a good number of other water birds.

Update, the lake is almost all gone now and the numbers of wading birds has dropped sharply (August 2015).